Here you can see all news from Consumer Europe. You can also use the search box if you are looking for something specific.

Gå til What are your options if your holiday or trip is affected by the coronavirus?

Your options for getting your money back or a refund on some of your expenses depend on several factors. Learn about your consumer rights here.

Most e-commerce goes smoothly, but sometimes consumers encounter problems. The Danish government has launched an ongoing information campaign entitled “Nethandel #heltsikkert”. 12 authorities and public institutions are behind the campaign, including the ECC Denmark, which is the European Commission’s Consumer Centre in the Danish Competition and Consumer Authority.

The Danish Consumer Ombudsman has reported four Danish companies to the police because their customers have not been clearly informed that they also enter into a subscription when buying products. The webstores in question are bilablau.dk, flipsu.dk, ophoerspriser.dk og pluus.dk.

European consumers are increasingly exposed to intrusive and misleading ads online. It is important that they adopt a more critical approach to these offers so they don’t end up paying for unwanted goods or subscriptions. Therefore, ECC-Net presents a film that enables consumers to identify online traps.

The Danish Consumer Ombudsman has reported two Danish companies to the police for sending unsolicited goods along with a demand for payment to consumers around the world. The police report is the result of a cooperation between national authorities within the EU.

A new report from the European Consumer Centres Network focuses on the impact of counterfeiting on individual consumer shopping online.

Gå til Twice as many complaints about online traps

Ads on free samples, trials and contests cause a growing number of consumers in the Nordic countries to complain to the European Consumer Centres. These consumers feel tricked into subscription or they are being charged a sum on their credit card without approving.

Gå til Guide to the Olympics in Rio

Tips to have a safe journey and a good experience at the Olympics in Rio.

Gå til ADR: Information requirements for all traders – who sell to consumers

All traders * who sell to consumers are required to inform their customers of their options for dispute resolution.

All  traders* who sell online are required to provide a link to the Online Dispute Resolution (ODR) platform. The  trader is required to inform its customers of their options for using the ODR platform, and the  trader must state its email address.

Today, The Eastern High Court ruled in favour of a consumer, as it declared that the online travel agency Goleif was required to reimburse the consumer’s home journey costs when the airline Cimber Sterling went bankrupt. The verdict has effect on handling 833 similar airline complaints filed at the Consumer Complaints Board.

Gå til New EU report: Danish consumers are the most trusting in the EU

Danish consumers readily complain if they encounter unfair practices, and place great trust in compliance with consumer legislation. Compared with other citizens of the EU, the Danes are the third most knowledgeable about their consumer rights, although their knowledgeability has decreased since the last survey. This is revealed by the just-published European Commission's Consumer Markets Scoreboard (CMS).

Think twice if you are offered a membership of a holiday club on your vacation in Southern Europe. The European Consumer Centers Network (ECC-Net) have heard from numerous Nordic consumers who regret the contract they signed during vacation – and subsequently find difficult to get out of.

Gå til Travel app: Express your consumer rights in Europe

There are lots of difficult situations any traveler may encounter during a journey abroad. Picking up a rental car that is more expensive than agreed, finding out that a hotel room booked from home is unavailable, buying an item that becomes defective shortly afterwards: we've seen it all happen, haven't we? Thanks to ECC-Net: Travel app you now have the perfect tool to stay cool and express your rights in any European language.

Also in 2014, complaints about air travel topped the list at European Consumer Centre Denmark. In the year ahead, the centre will focus specifically on air travel.

Gå til Chargeback in the EU/EEA

The ECC-Net receives a great number of cross-border complaints from consumers each year having experienced that their rights have not been respected, mainly when shopping online. 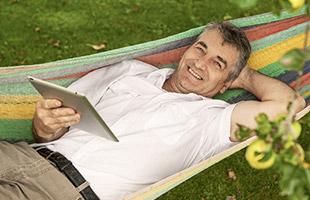